Achieving quality primary education in Nigeria, particularly for geographically marginalized areas remains one of the major setbacks of the recently phased out MDGs with its second goal dedicated to effort to achieve universal primary education. Tasked with a 15 year achievement plan, yet a few was accomplished with the game of numbers.
However, before we set out on the journey of another 15 years of the SDGs whose goal number four is targeted at achieving equitable, inclusive quality education and life-long learning opportunities for all by 2030, we must critically evaluate the shortcomings of the previous agenda. The reasons why the problem of lack of access to quality education is still ongoing in Rural Nigeria can be traced back rooted in the lines of history.

After the administration of Late Obafemi Awolowo, the first premier of the Western Region when he introduced Free Primary Education for all,subsequent Nigerian Governments of all shades have never taken the quality of Education seriously, expect the net enrolment rates which kept increasing at the detrimental expense of the quality. According to the Department of International Development (DFID) in a December 2012 release on Nigeria’s Factsheet, from 2000-2011,the total percentage of students across primary schools increased from 64percent to 76percent.This was however negated by unfolding facts from International Bodies like UNESCO and Universal Basic Education Board in Nigeria. The Latest ranking of UNICEF in 2015 that shows that over 54% of graduates of Public Primary Education in Nigeria lack basic numeracy and literary skills is a way to silence educationists and scholars who has argued blatantly that the Nigerian education system is working, while it’s glaring from the facts and figures that the system is built on a shaky foundation of less quality primary education. The annual budget from the Federal Reserve allocated to Education in Nigeria is below 12%,far from the 26% as required as highlighted by UNESCO.

Another problem that is an urban bias that has resulted into the negligent state of Rural Education leading to declining and unsafe learning environment (underfunded schools), limited and restricted curricula, inadequate learning resources, outdated and aging facilities, under motivated and malnourished learners. Priorities for educational reforms are being diverted and concentrated on the urban areas and this has alienated the rural communities. Due to their geographical location, long distances, poor roads, and inadequate shipping vehicles make it difficult to get building materials, furniture, equipment, and textbooks to remote rural schools. Points of sale of textbooks and other school supplies are few and far between in rural areas. While in many cases, building materials and furniture can be locally supplied, instructional materials are not available. These include not only textbooks but also the visual materials that decorate classrooms and stimulate learning, as well as simple scientific lab equipment, radios, and other audio-visual equipment that has become a standard part of many classrooms.

Community perceptions, family situations and certain life circumstances too has contributed to these ongoing crises.
According to the UNESCO, under the LEARNERS requirements for Quality Education, these children must be supported in learning by their family and communities but most of these rural areas are far behind as far as this is concerned.

Because rural areas are less densely populated than urban areas, rural schools are farther apart, requiring many children to walk long distances or pay for transportation and to lose valuable time in walking that could otherwise be spent helping at home. Some families are unwilling to send their small children down long roads alone. Rural children, more than urban children, are required by their parents to supply labor on the farm and in the home. Even children who live close to a school pay high opportunity costs in terms of the household economy. This is particularly true in planting and harvest seasons. As many incidences of household poverty in most countries are likely to occur in rural areas, children who attend school often suffer from poverty ailments such as poor health and are unable to afford the costs of school, including pencils, lunch, shoes, and often uniforms. Many families see little immediate value in their children sitting behind desks, learning reading and writing and other skills for which there is no use in the village. Children themselves often find no reinforcement of what is taught in school, making it seem like a foreign environment. The perception that school is of little value is heightened when poorly built, poorly lit schools are badly maintained, teachers often absent, and, in fact, very little teaching and learning taking place. Some parents see school as a funnel to urban areas where there are jobs. This can soon lead to disillusionment, if jobs do not materialize, or a fear that school will rob them of their children. Even where a primary school is accessible, there may be no secondary school within commuting distance. Parents who see primary school as the first stepping stone are often not willing to send their children when they know that the second stepping stone is out of reach. Finally, in spite of the poor conditions of schools, parents are usually asked to pay fees, official and unofficial, in addition to other costs.

At this point, maybe the following facts and figures can help drive home the points that rural education needs rejuvenation.

Forty percent of Nigerian children aged 6-11 do not attend any primary school, with rural communities in the Northern Region recording the lowest school attendance rate in the country, with 62% of their school aged girls uneducated.

Girls Education remains another big challenge to Inclusive education in Nigeria because the gender gap is significantly wide. The proportion of girls to boys in rural Schools ranges from 1 girl to 3 boys to 1 to 4 boys in some states.

The Net Enrolment value is increasing but completing the cycle of Primary Education is low. According to current data, 30percent of pupils drop out of Primary schools and only 54 percent transit to secondary school and this can be attributed to children labor, Economic hardship and early marriages for girls.

The Child Friendly School Concept is not comprehensively adopted in rural communities across various states in Nigeria. A majority of Primary schools especially in rural areas lack water, electricity and toilet facilities. For average, there is only 1 toilet for 600pupils in the Primary school system.

For every 100 Children who have access to primary education in Nigeria, only 68 do so in the rural communities.

At the end of four to six years of Primary Education, 30 to 50 percent of Primary school leavers in rural communities in Nigeria cannot write or read confidently and lack basic Numeracy skills.

To be Continued in Volume Two but then, shaping the state of education in Africa, especially for rural communities is not only a governmental effort, we all have roles to play. At AREAi we are ready for ours, what about you?

ESDForum on the Move; Touched down in Apete Oyo State in its third Month 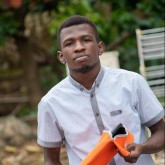